DANG it looked good on paper.

They just kept coming. 24 smiling faces from near and far gathered in the glorious gloom for a flawless mission statement , the Q served a soup sandwich shortly thereafter.

Purple Rain needs his morning stretch so after a quick down dog it was off for the docks.

THE THANG – The idea was a monster rack and stack covering 1.5 miles and 5 points of pain.

key word is IDEA. Musta been too much for this old dog to remember so my gift to the PAX was an opportunity to bond over the mumbliest of chatter. I loved every minute of it. It began well enough but brain fade is real and like what I was telling my wife last night,” this NEVER happens to me, I’m just preoccupied” YHC tried unsuccessfully to keep it all straight and finally pulled out the dang winki (not to be confused with the tuck and roll needed for the snow angels, Griswold) to end with what would have been the full pull. No one ended the morning dry and that’s really all I could ask for.

YOU MAY SEE THIS AGAIN.

Our return trip to the flag was dotted with the beginning of PAX CHOICE MARY which ended at the flag with DoggiePaddle taking us all the way to the hard stop with his South Carolina Burpee. ( notice no “s” )

So great to see brothers from far away Matlock, Hulahan, DoggiePaddle, CandyCane, and a wayward soul from the west in Hammy. Its an honor to be part of this machine and humbling to lead, thanks for the keys CHEECH you are the man —Tuesdays are the SHOW in the west and Cheech found a stud to take over for him as site Q, Honeywagon is centerstage for the next year. I think he will be great. 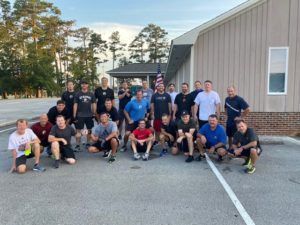 Well done Cheech, thanks for a great year.

We are grateful for this day and the blessings we have and will receive.