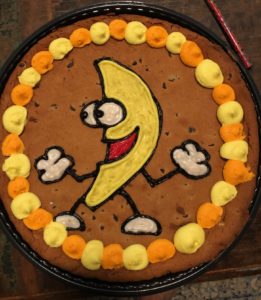 This was a special location change to honor Banana’s 21st birthday. Ponch’s 2.0 contracted a rare disease resulting in a strain of hepatitis which affected his liver. For 2 months he has been battling and yesterday got the news that Cancer was ruled out! He’s lost over 20 pounds and is supposed to report to OCS for his USMC ROTC requirement.

The large group of 26 pax began with 21 Side Straddle Hops, silent count with Burpees as a punishment. Then a round of Black Jack across a hilly field with Suma Squats and Copper Head Squats at either end.

Next a Scout Run on the road, punctuated with Burpees for Red Trucks and Goof Balls for White Trucks.

An Indian Run to the next intersection, with more Burpee’s and Goof Balls. At the intersection we did a compass plank with Up Dog, Down Dog, plank jacks, chilly planks.

A round of Mary concluded the exercise.

A namearama named 2 FNG’s, WeeMan and NeighborhoodWatch. Then a special COT prayer for Banana and his family at his house and a famed McSketti Cake concluded the workout. Thanks guys, for making it special for this young warrior.